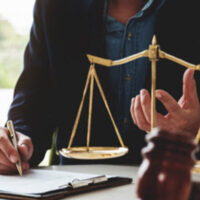 Florida residents are no strangers to major hurricane activity. Unfortunately, the destruction of a major storm often requires the rebuilding of thousands of homes. While this short-term housing boom is great for contractors, it can also place enormous strain on the supply chain.

Between 2004 and 2006, the devastation of Hurricane Rita and Hurricane Katrina led many contractors to rely on Chinese drywall to build and refurbish homes affected by those storms. Unfortunately, much of this Chinese drywall was defective. Homeowners started reporting damage to their homes–such as corrosion of metal wiring and the breakdown of appliances–as well as physical illnesses.

These reports soon led to Chinese drywall lawsuits filed throughout the country. Several thousand claims were consolidated as part of a multi-district litigation (MDL) proceeding before a federal judge in Louisiana. One of the main defendants in this MDL was known as the “Knauf entities,” a group of German-based manufacturers who produced Chinese drywall through a subsidiary.

Knauf eventually agreed to a “global settlement” of the MDL valued at over $1 billion. Under the settlement, eligible property owners had three options to receive compensation from Knauf. One such option–known as Option 3–entitled the homeowner to a cash payment and other “monetary benefits from the Knauf downstream chain of commerce entities.”

Although the Louisiana court approved the settlement several years ago, the judge is still hearing disputed claims. For example, on January 27, 2020, the court sustained an objection brought by one Florida homeowner whose claim for compensation was previously denied by a special master appointed to oversee the settlement.

This particular homeowner purchased his property in Boynton Beach sometime in the mid-2000s. In 2010, a home inspection revealed the presence of Chinese drywall. The owner and the home’s builder agreed to a remediation plan. But when the builder demanded a $25,000 payment from the homeowner, he balked and work stopped.

The plaintiff said he joined the Chinese drywall MDL in 2013. When he filed a claim for compensation under the settlement, however, Knauf asserted he was not eligible. The parties later agreed the homeowner would receive compensation if he could present physical evidence of the remediation to his property, as required by a prior court order. The special master later rejected the claim after finding the owner failed to produce this evidence.